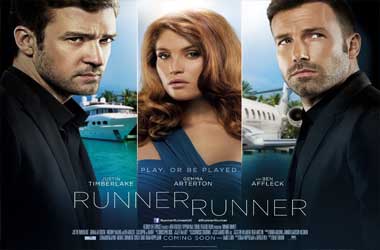 The movie Runner, Runner is a thrilled that is based on the online poker industry and was released in the United States in October 2013.

The movie had a star studded cast and featured the likes of Ben Affleck, Justin Timberlake and Gemma Arterton. The international online poker community paid a lot of attention to the movie as this was the first movie that based its script around the online poker industry. Runner Runner had a budget of $30 million and went on to make close to $63 million globally.

The movie highlights a dark side of the online gambling industry which involves money laundering, mafia control, illegal betting and tricks to avoid getting caught by the authorities.

The movie was filmed in Costa Rica and there were scenes that showed how the characters in the film managed to escape Costa Rica’s authorities.

Even though a year has passed since the release, Costa Rican authorities have now taken offence as they believe the film depicts Costa Rica to be a country where gambling is rampant and is a home for drug addicts, prostitutes and the underworld. Celso Gamboa, the minister of public security in Costa Rica said that characters in the film used uniforms that had police insignia on them. However, no permission was neither requested nor granted for the use of police insignia and this makes it illegal.

Gamboa took offense that the movie portrayed Costa Rica in a poor light and felt that the country was exploited for box office success. In a statement, Gamboa said

Instead of drawing attention to our country for its flora and fauna, they tarnish the image of our civilian police. It is a way of telling criminals and drug addicts that Costa Rica is perfect [for such behavior]. We want this to be fixed because you don’t [mock] our country.